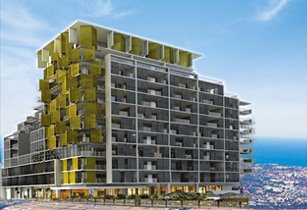 La Vista, which means ‘The View’ in Spanish, is aptly named, providing an uninterrupted vista east over Botany Bay andSydneyAirport, and north to the CBD.

Burnished gold and silver bi-fold and sliding aluminium louvres which residents move to control their living needs will give La Vista a random, ever-changing external appearance.

The pet-friendly La Vista has 54 apartments spread over seven levels, with the ground floor devoted to retail and commercial uses.

“La Vista is designed for a modern urban community,” said Mr Tsioulos. “Rather than just another apartment building filled with artificially-lit corridors I’ve taken a communal approach, creating shared spaces. Residents will still have their privacy, but there will be much more chance for interaction between neighbours.”

To get in touch and find out more. Contact Us